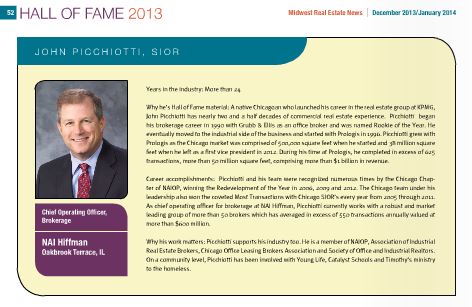 The entire team at NAI Hiffman proudly congratulates John Picchiotti on his selection as a member of the Midwest Real Estate News Commercial Real Estate Hall of Fame. John’s deep market expertise and strategic, focused business approach are complemented by his sincere, exuberant personality. He is proof that in this fast-paced world of commercial real estate, a genuine laugh, an attentive ear and a positive attitude are invaluable qualities. Congrats John!

Why he’s Hall of Fame material: A native Chicagoan who launched his career in the real estate group at KPMG, John Picchiotti has nearly two and a half decades of commercial real estate experience. Picchiotti began his brokerage career in 1990 with Grubb & Ellis as an office broker and was named Rookie of the Year. He eventually moved to the industrial side of the business and started with Prologis in 1996. Picchiotti grew with Prologis as the Chicago market was comprised of 500,000 square feet when he started and 38 million square feet when he left as a first vice president in 2012. During his time at Prologis, he completed in excess of 625 transactions, more than 50 million square feet, comprising more than $1 billion in revenue.

Career accomplishments: Picchiotti and his team were recognized numerous times by the Chicago Chapter of NAIOP, winning the Redevelopment of the Year in 2006, 2009 and 2012. The Chicago team under his leadership also won the coveted Most Transactions with Chicago SIOR’s every year from 2005 through 2011. As chief operating officer for brokerage at NAI Hiffman, Picchiotti currently works with a robust and market leading group of more than 50 brokers which has averages in excess of 550 transactions annually valued at more than $600 million.

Why his work matters: Picchiotti supports his industry too. He is a member of NAIOP, Association of Industrial Real Estate Brokers, Chicago Office Leasing Brokers Association and Society of Office and Industrial Realtors. On a community level, Picchiotti has been involved with Young Life, Catalyst Schools and Timothy’s ministry to the homeless.

View the complete Midwest RE Hall of Fame issue here »