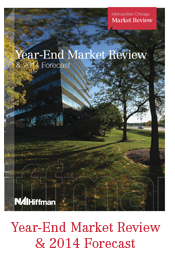 We are pleased to present our Year-End Market Review & 2014 Forecast, a detailed look at the past year in the Chicago Metropolitan industrial, office, retail, and investment real estate markets and the outlook for these markets in 2014 and beyond.

Chicago’s industrial market experienced its fourth consecutive quarter of positive net absorption during the fourth quarter, as more than 4.4 million SF of vacant space was removed from the market through leasing activity and user sales. Net absorption averaged more than 3.9 million SF per quarter during 2013, bringing the tally for the year to more than 15.8 million SF, the highest total since 2007. The vacancy rate dropped 81 basis points over the course of the year to 8.4%.

Both Suburban and Downtown Office Markets Improve in 2013

The suburban office market absorbed 960,233 SF over the course of 2013, with the fourth quarter posting the greatest tally of 457,564 SF of positive net absorption. This activity pushed the overall vacancy rate below 20% for the first time in over five years to 19.88%.

The downtown office market vacancy rate decreased by 96 basis points during the past year to 12.51%, the lowest rate the downtown market has seen since 2008. More than 1.1 million SF of vacant space was absorbed, as demand continued and several sizable leases were signed.

Vacancy and Rental Rates Stabilize in Retail Market in 2013

The Chicagoland Metropolitan retail marketplace began to stabilize in 2013. Chicago and suburban retail trade areas experienced a decrease in shopping center vacancy as well as stabilization of quoted asking base rents. However, Safeway’s decision to cease operations of the entire Dominick’s grocery chain halted the momentum of recovery in the fourth quarter.

For further information regarding the content of these market reviews, please contact:
Craig Hurvitz | Director of Research
630 693 0645
churvitz@hiffman.com