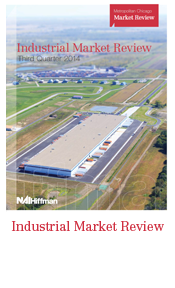 Conditions have now been improving in Chicago’s industrial market consistently for four years. In that time, more than 59 million SF of vacant space has been absorbed, including all of the vacant space introduced to the market due to the economic downturn and then some. The industrial vacancy rate has dropped by 4.1% over the past four years from its peak of 12.1% to 8% by the end of September, a rate lower than the vacancy rates witnessed in 2007 prior to the recession.

This positive trend continued through the third quarter, as 2,246,197 SF of vacant space was absorbed, bringing the year-to-date tally to more than 8.8 million SF, compared to nearly 11.4 million SF absorbed during the first three quarters of 2013. The majority of the positive absorption recorded during the third quarter took place in the I-80/Joliet Corridor, where sizable new leases and two new build-to-suit facilities were completed, resulting in the absorption of 2,066,375 SF of vacant space. 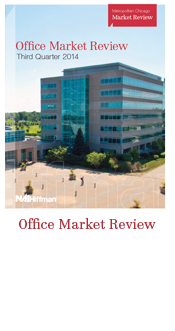 Net absorption in the suburban office market outpaced the downtown office market for the fourth consecutive quarter, and has now done so for eight of the past ten quarters. Between July and September, a total of 245,616 SF of vacant space was absorbed, bringing the year-to-date tally to nearly 1.3 million SF. The vacancy rate improved by 19 basis points during the third quarter to 18.88%, dropping below the 19% threshold for the first time since 2008.

The downtown office market vacancy rate improved by 29 basis points during the third quarter, the greatest decrease since the second quarter of 2013. At the end of September, 11.96%,of the space in the downtown office market was vacant, the first time this rate has dropped below 12% since 2008. Net absorption totaled 116,367 SF for the third quarter, with the East Loop and River North submarkets absorbing the most space during third quarter at 133,820 SF and 101,565 SF respectively.

For further information regarding the content of these market reviews, please contact:
Craig Hurvitz | Director of Research
630 693 0645
churvitz@hiffman.com