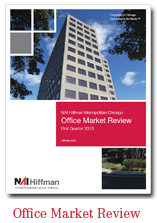 The vacancy rate in the suburban office market has declined 3.38% since it peaked in 2010, ending the first quarter at 20.28%. In the two-and-a-half years since the market turned around, more than 4 million SF of vacant space has been absorbed through increased transaction activity. While the vacancy rate remains well above what it was in 2007, the recovery has come a long way.

The recovery in the downtown office market slowed during the first quarter, as only 243,977 SF of vacant space was absorbed. The few significant new leases signed were partially offset by the effects of new vacancies being introduced to the market. The vacancy rate continued to drop during the first quarter, but at a slower pace, dipping to 13.29% by the end of March. This represents a decrease of 18 basis points from last quarter, and is 1.13% below the rate recorded a year ago.

Demand for Space Increases in the Industrial Market 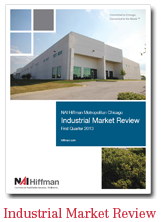 Over the course of the first quarter, nearly 4.5 million SF of vacant space was absorbed through new leases, lease expansions and user sales. This is one of the strongest periods of demand witnessed since the market recovery began in the second half of 2010. Since the bottom of the market to date, more than 37 million SF of vacant space has been absorbed, dropping the vacancy rate from 12.1% to 9% by the end of March, the lowest rate the market has seen in more than five years, and below levels witnessed in 2008 as the economic outlook was beginning to sour.

Rental rates are beginning to increase again in some of the market’s more active submarkets, and landlords are offering fewer leasing concessions such as free rent or tenant improvement allowances. Construction activity continues to increase as developers become more confident in the economy. Additionally, demand for space coupled with the scarcity of available spaces in certain size categories has dictated new construction.