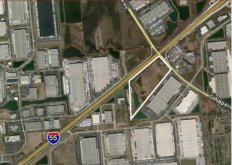 Leasing activity has accelerated over the past year throughout much of the I-55 Corridor, and developers have taken notice and begun to once again risk speculative developments. Seefried Industrial Properties has just joined this group by buying 13 acres of land in suburban Bolingbrook from Network Strategy, LLC and planning a speculative building on the property, located on the corner of I-55 and Veterans Parkway.

“The I-55 Corridor cumulative leasing volume reached a healthy 5.7-million-square-feet in 2013, nearly identical to the 5.8-million-square-feet leased for all of 2012,” notes a recent Colliers report on the fourth quarter. And that activity has made an impact.

“Speculative deliveries surpassed build-to-suit completions for the second consecutive year in the I-55 Corridor,” the report notes. “Three speculative facilities totaling 410,400-square-feet were built in 2013 compared to just one build-to-suit totaling 46,000-square-feet.” And that building boom continues. Developers have six local industrial projects underway with a total 3-million-square-feet. “We anticipate one more speculative big box project to break ground in 2014.”

Also mentioned in RE Journals