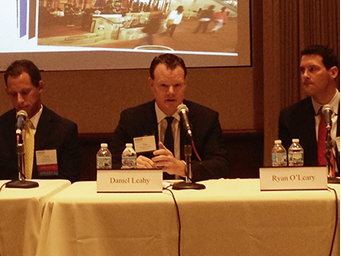 On Thursday, April 17th, NAI Hiffman’s Daniel Leahy participated in a panel discussion moderated by Chris Zubel, Managing Director with CBRE on the current state of the industrial real estate market in Chicago. The conversation discussed deal structures, economic trends, tenant expectations, and which players are new to the market. Panel members included:

NAI Hiffman has summarized this conversation below:

Zubel – The goal of the discussion today is to talk a little bit about the market, the trends, has the market shifted from a tenant’s market to a landlord’s market, and also to tap into Ted & Ryan’s expertise around what’s going on with the capital markets, what are investors looking for, and what are developers looking for.

Kling – I’m happy to report that year-end 2013 we saw about 13 million SF of positive net absorption. I think that can be attributed to both increased tenant and buyer demand. This resulted in about an 80 basis point decrease from 2012 to 2013. We continued to see that trend during the first quarter. Generally speaking, rental rates for class “A” space have really improved. I think for a 500,000 SF user in the I-55 Corridor today, they can expect to be in the $3.25-$3.50 net range, compared to the height of the recession when that number could have been sub-$2.75 net. For class “A” space in O’Hare, in some cases we were sub-$5.50 net, and now that user would pay north of $6.50 net.

Leahy – I think the market has absolutely transitioned from a tenant’s market to a landlord’s market. It depends really on the submarket, the size of the space, and the quality of the space. Certainly we’re seeing longer-term leases, we’re seeing rental concessions go down, abatement periods going down, and we’re seeing rental rate increases as much as 10% to 20% in certain submarkets. Focusing on the I-55, Central DuPage, and I-88 submarkets, things are really tightening, which is leading to the speculative construction frenzy that we’re going to see over the next 18 months. If you have a requirement for 300,000 SF in I-55 right now, there is only one option in the entire submarket. In I-55, there are 10 buildings planned to come out of the ground in the next six months. If cap rates go up, developers are going to have to continue to push rental rates. I’m bullish that we’re going to continue to see rental growth.