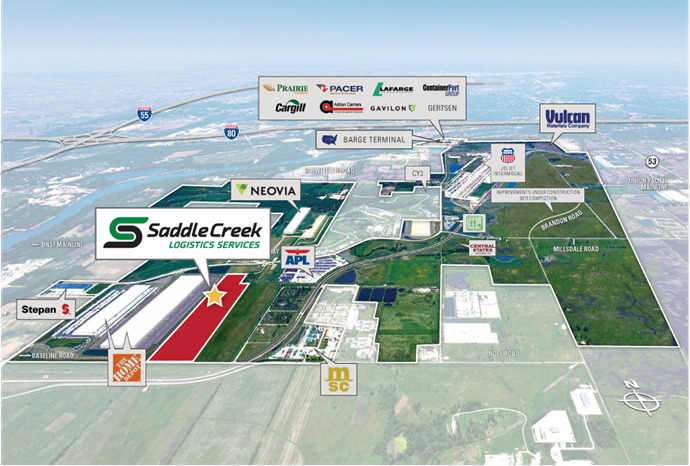 A Florida-based logistics company plans to open a 1.1 million-square-foot warehouse in Joliet that will have more than 200 employees, after considering locating the facility out of Illinois.

Lakeland, Fla.-based Saddle Creek Logistics Services has signed a lease for the building, which Oak Brook-based CenterPoint Properties will build in its 6,400-acre CenterPoint Intermodal Center, according to a statement from CenterPoint and brokerage NAI Hiffman, which represented the landlord.

“Locating less than a mile from the entrance to Union Pacific’s Intermodal Terminal and adjacent to the interstate highway network allows for increased container movement for our operations, which translates to faster service for our logistics clients and in turn, added value to our customers,” Saddle Creek executive Doug Blatchford said in the statement.

Few existing warehouses in the Chicago area have large vacancies. Overall Chicago-area industrial vacancy was 7.6 percent in the first quarter, the lowest level since 2001, according to Colliers International.

Construction of the $43 million project will create about 250 jobs, with 200 permanent workers to be based in the warehouse, according to a February statement from the city of Joliet, which said Saddle Creek was requesting a 50 percent tax abatement for five years to help offset the cost of the move.

Construction of the build-to-suit project was set to begin in the spring, with Saddle Creek moving in by the end of the year, the city said at the time. Saddle Creek also was considering other sites, including one in Indiana, the city’s statement said.

Saddle Creek agreed to maintain 92 existing jobs and add another 112 in exchange for the tax abatements, according to a Will County document.

The new facility will include 378 car parking stalls, 328 trailer parking stalls and 14,670 square feet of office space. It is located near the junction of interstates 55 and 80, the Union Pacific terminal and BNSF Logistics Park Chicago.

The warehouse will include a light manufacturing assembly operation for off-road vehicles, beverage packing and other distribution uses, the Joliet statement said.