2013 has seen a significant increase in investment activity over previous years in the suburban office market. Additionally, owners have had to be resilient through the downturn and the lure of the city has required them to be creative as tenant demands are changing. 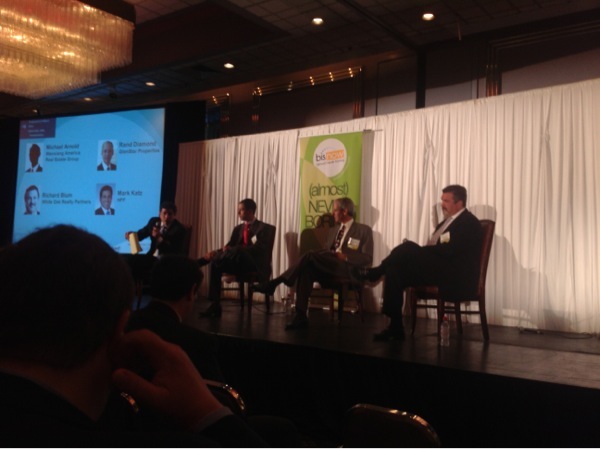 8:10 a.m. – Katz: in 2012, the suburban office market saw $650 million traded. 2013 has continued the trend, and 4 million SF has been absorbed over the past two-and-a-half years. The suburbs has been outperforming the city for the past several quarters, and 20 of Chicago’s 28 Fortune 500 companies are still located in the suburbs. It’s fair to say that the death of Chicago’s suburban office market has been grossly overstated.

8:14 a.m. – Blum: We’ve had an amazing amount of leasing activity over the past three years, we believe this was due to pent-up demand.

8:15 a.m. – Diamond: It’s true that real estate is about location, location, location, and that applies to the suburban office market as well. There are well-located properties in the suburbs and not-so-well-located properties. We have seen positive absorption over the past 18 months, and have seen this in the Northwest market during this time as well, which had been struggling the most due to the recession.

8:18 a.m. – Arnold: You have to be more careful about finding the right property in the suburbs, but the basis and yield are better in the suburbs than the CBD.

8:19 a.m. – Katz: Rahm has done a fantastic job for the city, but we don’t have that advantage in the suburbs. We’re dealing with many mayors and many different local governments. Companies moving to Chicago not only helps the city, but also helps the suburbs.

8:26 a.m. – Katz: Parking seems to be a consistent conversation throughout the suburbs – fitting more people into smaller spaces. A lot of older buildings are considering adding a parking deck to improve parking ratios. It’s one of the issues with many of the market’s older buildings that buildings in the CBD do not have to contend with.

8:29 a.m. – Blum: Investment activity and interest, especially with serious bidders offering a solid price, is considerably up over a year or two ago. While things have really heated up in the city, the suburbs aren’t quite there yet. We’re at about 50% of the activity we witnessed during a healthy market.

8:33 a.m. – Arnold: The rents we have achieved have been better than we expected a year or two ago, and leasing activity has really increased. We’re seeing significantly more competition on anything that can be considered a “value-add” property or a distressed asset.

8:36 a.m. – Blum: A couple years ago we bought Columbia Centre III, a distressed asset, and if that building was on the market today we wouldn’t be able to buy it. Those buildings are well-built and in a great location. We’ve put some money into the building, updated the lobbies, and have leased a lot of space and seen rental rate growth over the past two years. We hope to reach 90% leased soon, at which point we’ll put the building back on the market.

8:40 a.m. – “Value-add” pricing and activity has risen by an exponential amount. Vacant buildings are selling and this type of activity has been part of what has carried the ongoing recovery. 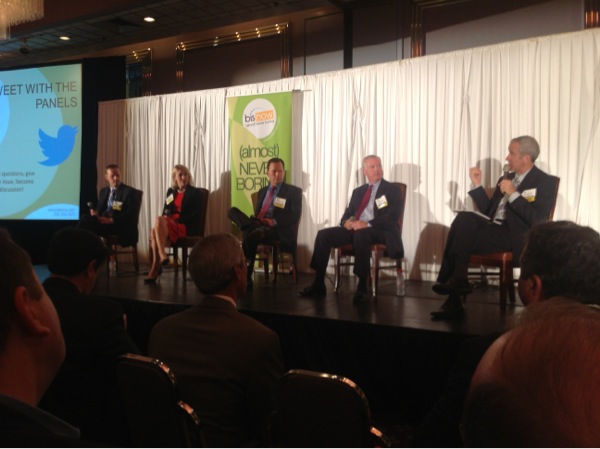 8:48 a.m. – Adler: The suburbs are hot! Our suburban marketplace is 126 million SF and nearly the size of the CBD, and that’s a lot of space. If I look back at the third quarter of 2010, we had just completed our eighth consecutive quarter of negative net absorption – it was pretty depressing. Now we have seen positive absorption in nine of the past ten quarters. Yes, we dumped about 4 million SF of vacant space on the market due to the recession, but we’ve leased a lot of it back. While vacancy is still about 20%, if over the next 10 quarters we do what we did over the past 10 quarters, we would be back to a 15% vacancy rate. Looking at the quality class “A” buildings in the market, the vacancy rate isn’t 20%, it’s more like 14%.

8:51 a.m. – Quayle: Our portfolio has seen occupancy increase over the past couple years, and while we’re optimistic, it’s cautiously so. This summer has been a bit slower that recent periods, and the economy continues to falter.

8:52 a.m. – Rolfs: I think most of the activity that we’re seeing are companies upgrading to nicer space. It helps that no new construction has hit the market, but we still haven’t seen the job growth necessary to sustain a healthy recovery.

8:53 a.m. – Shehan: There is still a lot of caution out there. We’re not going to see new construction, that won’t be a concern for some time. However, we will continue to see specialty build-to-suit projects, which have hurt the market because they leave behind a lot of empty space.

8:54 a.m. – Linton: Why is it that companies are building these build-to-suit facilities? It’s not the economics, it’s likely they are getting exactly what they want – the image, the design, the layout, etc.

8:55 a.m. – Adler: I think part of it is that the significant blocks of nice vacant space just don’t exist anymore in certain desirable markets. That’s probably one of the big reasons why Hub Group decided to build their own building. Also, many of the buildings in the market are aging and don’t have the amenities or image that certain companies demand.

8:57 a.m. – Rolfs – A lot of the special-purpose buildings that have been vacated during the past few years will only cater to a certain type of tenant, and a type of tenant that isn’t really looking to move. They will likely remain empty for years to come or will eventually be torn down, similar to what happened to the Allstate building off I-90.

9:00 a.m. – Adler: Most of the sublease space that I’ve walked through I’ve walked away with the realization that “wow, that was really nice space seven or eight years ago.” I don’t want to say that sublease space is non-factor, but certainly not as much of a factor as a few years ago.

9:02 a.m. – Adler: It strange to say that there has been rent growth over the past few years, but you have certainly seen rents increase in the O’Hare market. Most recently, it’s hard not to like what has happened in the Northwest Suburban market. Many of the high-quality class “A” spaces in Schaumburg or Rolling Meadows have seen a lot of activity lately.

9:03 a.m. – Rolfs: We continue to see spinoffs of existing companies taking new space as they expand. This has been an encouraging trend.

9:04 a.m. – Shehan: Evanston has been a bright spot as well, with a lot of interest and leasing activity recently. I attribute this to the public transportation options, proximity to Chicago, nightlife and amenities Evanston has to offer. O’Hare has also seen increased activity due to the public transportation options. However, the rest of the suburbs don’t have this advantage – commuter trains travel to the downtown of each suburb, while many office buildings are located on the periphery of those towns.

9:06 a.m. – Adler: Parking ratios continue to be a big conversation. We have actually looked at doing valet parking in some of the buildings due to the high cost of adding a deck. However, many of the companies that insist they require a five per thousand SF ratio don’t really use it, as many employees are salespeople and not always in the office or employees are out sick.

9:08 a.m. – Rolfs: In the time that I’ve been doing this, I’ve noticed that it’s a cycle – downtown gets popular, then the suburbs get popular. Right now, technology companies are hot and are hiring younger people, thus the popularity of the downtown office market. I think this will eventually change due to the cost advantages and image offered by suburban office buildings.

9:11 a.m. – Quayle: Another advantage to the suburbs is that we have much lower taxes and don’t have the risk of property taxes increasing drastically like they can do downtown.

9:13 a.m. – Adler: While the city is offering incentives to move downtown, the state is also offering significant incentives to companies that want to move to or stay in the suburbs.

9:15 a.m. – Rolfs: Spec development will eventually return when we finally see real job growth. We’ll continue chugging along and filling the vacant space in the market until the state gets its act together and companies feel more confident in hiring.

9:16 a.m. – Shehan: The other issue is that construction costs have gone through the roof, making spec development cost prohibitive.

9:22 a.m. – Adler: Going forward, I worry about the state of Illinois and their ability to reduce the deficit. When you take our already high taxes and make them even higher, then we have a real problem down the line. I think the positive trend we’ve seen in the suburban office market will continue.

9:25 a.m. – Rolfs: The state of Illinois continue to be my biggest concern. You look at activity in other nearby markets like St. Louis and Minneapolis, and we should be doing much better than we actually are. I still am optimistic about the future of the market, but think we could be in a much better place today.